After recently revisiting an old project from 2012 and re-rendering animations of public transports in London in higher resolution, I gave it a try with GTFS data from other cities that I have lived in.

This was made possible by the wide availability of GTFS data for many large cities around the world, something that wasn’t really a concern of public transportation agencies when I first explored this idea nine years ago. At the time some agencies were even strongly opposed to what is now known as the “Open Data” movement, and resisted opening their data sets to the public.

GTFS is the General Transit Feed Specification format, a set of rules for CSV-based text files that describe the planned schedules of public transit vehicles. Originally developed at Google in 2005, it has become a de facto standard for static schedules.

A separate format, GTFS Realtime, is an extension of GTFS that can be used to share real-time public transit data in the form of updates made to the original schedule. Agencies can use it to communicate delays, cancellations, changed routes, etc.

A GTFS feed is usually distributed as a compressed archive containing a few text files. The data model is relatively simple and yet also extensible, although the number of required fields is somewhat limited. Some feeds might provide more detailed data with route metadata such as the background and label color associated with a bus line, but only the most essential data is guaranteed to be included if the feed follows the specification.

GTFS defines a few object types that relate to each other:

A Route is a group of trips displayed to riders as a single service. This is what we generally refer to as a bus line, or metro line for example. It is identified by a route_id and has attributes like a route_short_name, a route_long_name, a route_type (metro/bus/rail/tram/boat…), a route_color (optional), and a few more.

A Stop is where vehicles pick up or drop off riders. It is identified by a stop_id, can have a stop_name, and must have a stop_lat and stop_lon describing its coordinates. This is the physical location of a station or bus stop, not the arrival of a vehicle at a certain time. Some agencies will include other metadata like wheelchair_boarding for accessibility or level_id for multi-story stations.

A Trip is the scheduled journey of a vehicle following a Route and going from Stop to Stop, identified by a trip_id and linked to a single route_id. It can have attributes like direction_id (inbound vs. outbound) or bikes_allowed. Trips do not detail their schedule, this is done with StopTime records.

A StopTime describes when a vehicle traveling for a Trip along a Route will be at a Stop. It has a trip_id, a stop_id, an arrival_time and departure_time in HH:MM:SS format, and a stop_sequence providing an order for these points along the Trip. The full sequence of StopTime records for a given Trip, joined to their corresponding Stops and ordered by stop_sequence, is what you might see inside a bus on a board listing all the planned stop times and locations for this vehicle.

These records are all in individual CSV files bearing the same name as their record type (e.g. all Route entries in routes.txt), and a few other files can enrich the data set although they are all optional. For example, fare_{attribute,rules}.txt list the costs associated with routes, calendar.txt and calendar_dates.txt help to separate weekday vs. weekend service, transfers.txt describe how long travelers have to switch vehicles at a stop, etc.

A post on the Interline blog goes into more depth and explores some of the metadata in GTFS files for the San Francisco Bay Area.

I found GTFS very easy to understand, and have no doubt that its simplicity is what made it so popular.

In addition to being trivial to parse, these files can also be imported into SQLite with just a few commands. I often used SQL to debug missing vehicles or find the details of a Route when I was working on these renderings.

Here’s how we would look up 5 metro lines from the Paris STIF data set:

Given a route_id we can list its schedule Trips, here two random trips on line 1:

Then for these two trips, let’s look up the first 5 planned stops, their time, and location:

After adding a few indexes on the <type>_id fields, even complex queries over a large data set are pretty snappy.

OpenMobilityData is a free repository of GTFS data providing access to over 1,200 feeds from public transit agencies in more than 50 countries. It is maintained by a Canadian non-profit organization and hosts high-quality data sets that are frequently updated.

Feeds that aren’t fully valid according to the GTFS specification are clearly labeled, with mistakes listed on the download page:

I also generated a longer version where the vehicles can be followed more easily.
At 4 seconds per frame and a 6-minute run time, they tend to zip across the map very quickly; at 2 seconds per frame, the slower video is 12 minutes long.

This rendering also has a slower version, again 12 minutes long.

This section is copied from a previous article, to collect all renderings on a single page.

Since OpenMobilityData didn’t have feeds for Transport for London (TfL) vehicles, I combined the London Tube schedule in GTFS format from the data analysis platform hash.ai, and the London bus timetables on the British government’s Bus Open Data Service website.

Here’s the rendering with data from April 2021, zoomed in to show the center of London:

I also rendered a larger area, since the public transport network extends pretty far away from the city center:

For this area, I started by cropping a map of the Bay Area to focus on San Francisco and Oakland. Here, we see mostly SFMTA buses and Muni metro light rail in San Francisco, with also a few BART trains crossing the Bay, Caltrain commuters coming from the south, and AC Transit buses in Oakland.

Finding data for the Bay Area is more challenging than for Paris and London, due to the number of operators involved. Thankfully the Metropolitan Transportation Commission publishes a common API to download GTFS schedules for 33 local operators on the website 511.org. The rendering below is based on data from all of these feeds, even though not all companies operate in the cropped area.

The difference between this region and Paris or London is striking, and reflects the vast difference in public transport funding and use between these cities. Whereas Paris and its close suburbs has over 1,200 trains and 5,600 buses running at rush hour, we only see a maximum of 30 trains and 800 buses here.

Similar to SF & Oakland, this time extended to show the entire San Francisco Bay with San Jose in the south and up to parts of Marin County in the north and Livermore in the east. We can spot the automated trains at San Francisco Airport, as well as the Blue, Green, and Orange lines of VTA light rail in the South Bay. There are even a few buses roaming around Half Moon Bay by the ocean.

To be continued? ¶

I’d like to add more cities in the future if I can find high-quality data; I was thinking to try New York City, Beijing, or Tokyo next. Depending on the amount of metadata included in the GTFS feeds, the process can take some time if I have to add color or route type information manually for a few routes.

I’ve been playing with maps for the past few weeks in an effort to find the best location for my next flat, cross-referencing several data sources to assign scores to offers from agencies and property owners.

The rendering on its own is clearly inferior to Google Maps, but the data itself is very valuable: being able to understand how streets are connected together makes it possible to implement search algorithms on top of a graph representation of the city. So instead of focusing my efforts on building a better renderer, I’ve decided to keep using Google Maps as a background image only and to implement my application using simple projections on top of that background.

In my search for relevant data sources, I downloaded a copy of the Transport for London (TfL) schedule list, describing each train, bus, or boat and its planned stops with their geographical location. The files are in a TfL-specific format, which can be converted to the more accessible GTFS.

An application that builds on several input feeds to print out a result based on their interaction needs cleaned-up data sources with minimal bias or error rates. In order to make sense of the TfL schedules, I plotted the journeys of every vehicle I knew of, looking for obvious gaps in the data. Tube trains and the DLR are plotted with colored circles, while buses are represented as red squares. 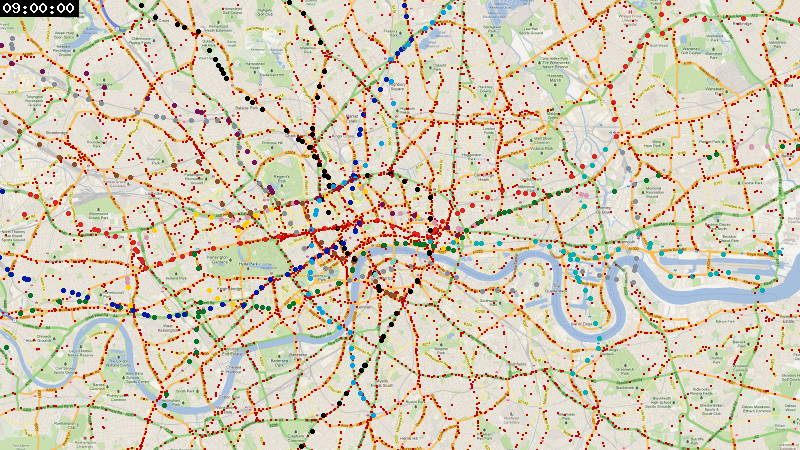 And with a wider view: 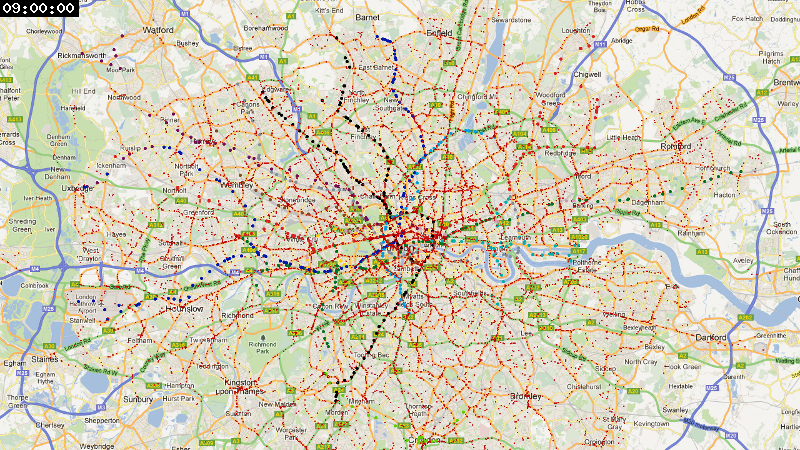 After almost 9 years leaving this project untouched, I recently re-discovered the code I used to generate these videos and decided to try re-rendering them in higher quality, this time in 4K at 60 frames per second.

I downloaded the London Tube schedule in GTFS format from the data analysis platform hash.ai (it’s still not available from TfL), and the London bus timetables on the British government’s Bus Open Data Service website.

In addition to trains and buses, this version also includes river boats, displayed as diamond shapes (look for them as they bounce from dock to dock).

Here’s the new version, zoomed in to show the center of London:

You can also use the video player below to watch it in 4K, not re-compressed by YouTube:

And zoomed out for a wider view, on YouTube:

Again, here is the higher-quality source video file for this different zoom level:

And the same frame at the wider zoom level (full file is 9 MB):

This visualization made a few things clear for me:

The code is available on GitHub, but you will need a converted GTFS dump of the TfL data to run it yourself. Background images are © Google.